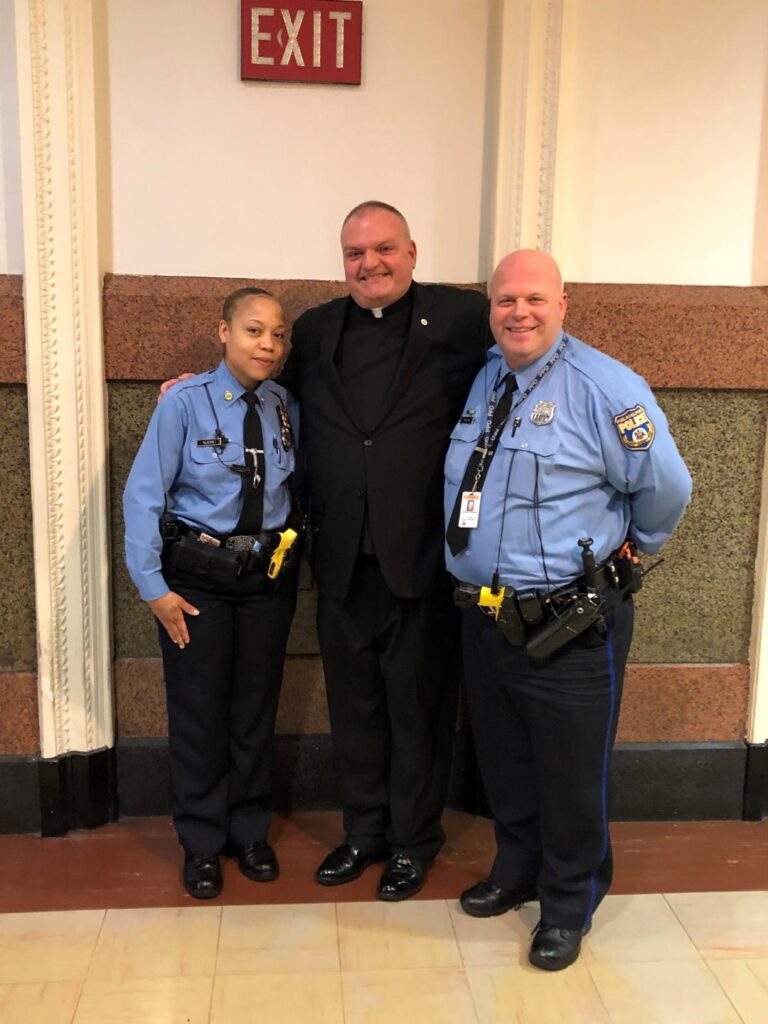 In January, 2014 a unique ministry came into existence in the Philadelphia Police Department. With the encouragement and support of John McNesby and the Fraternal Order of Police, Father Steven Wetzel, O.S.F.S. set up shop at a desk provided by the FOP. And so began the Michael the Archangel Ministry Program.

But this is NOT a desk bound ministry. The goal of this program is to provide the spiritual services one would expect in a parish or place of worship and make them available in the workplace. In actuality, Father Steve’s parish is the entire Philadelphia Police Department. So he literally “hit the bricks”.

Father Steve went around to the various districts and units and quietly introduced himself and the Ministry to the officers of all faiths and some with no faith. Each day, the Ministry grew by this gentle one on one approach.

It wasn’t long before officers and their families invited Father Steve to preside at baptisms, funerals, weddings, and sick calls. Father Steve started a monthly Mass to honor the memory of officers slain in the line of duty for each individual month.

Eventually, Father Steve started going out on patrol with working officers. In this capacity, he responded to calls of officers in combat and in at least one case, arrived on the scene of an officer shot in the line of duty. He was on location with the AMTRAK train wreck in Philadelphia in May of 2015.

More and more officers began to trust his judgement and he was made aware of many personal crises affecting officers and their family members.

He sat in on addiction interventions and provided pastoral counseling on a wide range of emotional, psychological, and marital issues. He coordinated with professional providers in the psychological field and sought their services through referrals. He also maintains a network of clergy of other faiths and does not hesitate to bring them in on crisis situations.

One of the most tragic situations is the need to provide counseling for the families who have suffered a sudden death of a family member. This is even more acute when the deceased is a child or a result of a suicide. However, thanks to Father Steve’s physical presence, at least six suicides were prevented from occurring.

Father Steve is a regular visitor to Children’s Hospital to check on officer’s kids who have been hospitalized. He also regularly visits other hospitals to check in on officers and other family members, anointing the sick where appropriate.

Father Steve does not limit his service to active officers and their families. He also regularly interacts with the officers and staff of the FOP and with many pensioned officers. In addition, Father Steve has provided service to Police Departments in jurisdictions surrounding Philadelphia.

The knowledge of and appreciation for the Michael the Archangel Ministry has spread throughout the Police Department and several high-ranking officers serve on Father Steve’s Board of Directors. He has been invited to attend many police functions and has visited and blessed many police districts and units.

But the true value of this Ministry is that for the past seven years and well into the future, many officers now know that spiritual help is just one phone call away. All Police Departments should be so blessed.